Taken from the Catholic Universe 10 November 2013 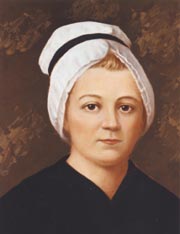 Having stated last week that it was possible to be both a Catholic and a feminist, my heart leapt at the announcement from the Vatican this week that Nano Nagle, the Irishwoman who founded the Sisters of the Presentation Order is to be declared a Venerable, the next step on the path to Sainthood.

Born to Irish Catholic gentry in Ballygriffin, North Cork in 1718, Nano (who was Christened Honora) was born against the backdrop of Ireland’s notorious penal laws, that were designed to subjugate and oppress Catholics, with the aim of wiping out the practice of Catholicism within Ireland. In the words of Edmund Burke, the Irish statesman, politician and philosopher, Nano’s distant relative, “Their declared object was to reduce the Catholics in Ireland to a miserable populace, without property, without estimation, without education”.

Eighteenth century Ireland banned the opening of Catholic schools and also forbade Catholics from travelling overseas to receive an education, therefore Nano’s family took some risks in smuggling her and her sister Ann to Paris where they were able to enjoy a full Catholic education.

It was witnessing the plight of the Parisian poor that inspired Nano to consider how she could best serve them and upon discerning a vocation, following advice from her spiritual director she decided to dedicate her life to providing an education for children in poverty.

The world is currently captivated by the story of the courageous Pakistani schoolgirl Malala Yousafzai who was shot by the Taliban for her activism encouraging girls to attend school, against considerable cultural pressure and yet 250 years ago, a Catholic woman was displaying the same bravery and pioneering spirit in terms of overcoming a cultural bigotry and prejudice that was enforced by law. When Nano’s brother accidentally discovered what she was up to, his initial reaction was anger as she was placing herself and the family under considerable risk.

Embodying the spirit of the Gospels, Nano’s first school in Cove Lane, Cork, admitted thirty children, from the poorest and most deprived backgrounds, by the time she died in 1784, a whole network of schools had been established, teaching over 400 pupils in seven different parishes, all funded by her own inherited wealth. The schools taught basic reading, writing and arithmetic alongside fundamental catechesis. She also introduced classes in practical skills such as needlework and lace-making in order to enable girls to be able to earn their own living and lift themselves out of poverty.

When her personal fortune ran out, she began begging on the streets on behalf of her schools and eventually founded her own order of religious sisters with the constitution of educating the poor. As the penal laws were still in force, instead of being able to be called Mother Superior or wear a habit, Nano was known as Miss Nagle. A hundred years before the work of Florence Nightingale she became known as the the Lady of the Lantern and her sisters known as ‘Nano’s walking nuns’, her love of the poor not confined to the education of children, but she extended her work to visiting the homes of the poor and doing rounds in the backstreets of Cork.

At a time when the media, the Irish media in particular and public life is preoccupied with sneering at Catholic Religious Orders, it is worth highlighting their contribution to Ireland and the world at large. Presentation Nuns alongside other orders were the first to provide Irish people with the opportunity for an education when no Government or other public body was willing or able to do so and at great personal cost to themselves. Through the foresight of those such as Nano Nagle, and the thousands of religious who dedicated their life to this work, generations of pupils were given a first-rate education, equipped with skills and thus able to elevate themselves out of poverty and contribute to the common good.

Today, many Catholic religious orders continue to provide education, often the only education available in some of the poorest and most unstable parts of the world, such as in Africa, Latin America and in Asia, a fact that is sadly all too often overlooked or ignored, even by Catholics. Nano’s Sisters of the Presentation Order has spread as far afield as Peru, Chile, Ecuador, India, Pakistan, Slovakia, Pakistan, the Philippines, the United States, Zambia and Zimbabwe.

Nano Nagle, set down the foundations of the education system in Ireland and inspired generations of educators to come, including a number of notable women who founded their own religious orders and network of schools. Those who so often rush to accuse the Church of misogyny ought to examine the history of Nano and her spiritual descendants, recognising and celebrating their contribution and the contribution of the Catholic Church to the education and empowerment of women.

Nano Nagle’s lantern became the symbol of the Presentation Sisters all over the world. Now her life has been officially recognised as being heroic in virtue, she continues to remain a beacon for twenty-first century Catholic women, showing that fighting for the causes of women and social justice do not need to be mutually exclusive.