Over the weekend my Irish pro-life colleagues thanked those of us in the UK who have been supporting their efforts to keep Ireland one of the safest places in the world for the unborn. All the tweets, blogposts and prayers have really helped to sustain them throughout their campaign; it has apparently been a source of comfort to see people from all over the globe uniting behind Ireland’s pro-life lobby in the face of Enda Kenny’s determination to steamroller abortion on demand into a country that boasts the lowest rates of maternal mortality in the globe.

Tomorrow is an extremely significant day for Ireland with the Dail due to vote on the bill that will introduce abortion up until term for mothers deemed to be suicidal, despite the fact that every single medical expert who testified to the Oireachtas committee stated that abortion is never an appropriate treatment for suicidality. The Irish government is acting purely on the basis of ideology and against all medical evidence and international experience for treating suicide ideation.

Minister of State, Lucinda Creighton has put her political career on the line, by not only proposing a series of amendments designed to adequately assess and treat a pregnant woman presenting as suicidal, but has also pointed out how Enda Kenny has misled Fine Gael voters, as their election manifesto in 2010 did not commit the party or their TDs to the introduction of abortion. If Miss Creighton votes against the bill, alongside 4 other TDs who have already signified their intent, then they will lose the party whip. It is thought that had Enda Kenny allowed a free vote then between 20 and 30 TDs would have voted against the bill, however Kenny is not prepared to risk his party’s political stability, deeming victory more important than the conscience of its TDs who are being forced to break any previous pro-life promises to voters. Any votes in favour will be made out of fear, not conviction.

Those of us who have regarded Ireland’s example as an inspirational model of maternal healthcare have been looking on in despair as a deeply ideological bill which will lead to abortion on demand is imposed upon the country, despite overwhelming public opposition to a liberal abortion regime.

For years the line of argument has been that Irish women seeking abortion are forced to come to England, in a bitter and grim irony the proposed bill will mean that heavily pregnant English women will now be able to travel to Ireland for a late-term abortion if they claim that they are suicidal.

Here’s the words of Dr Bernard Nathanson, one of the foremost pro-abortion activists in the USA, who helped found the National Association for the Repeal of the Abortion Laws, (and later converted to the pro-life cause) on the best mechanism for liberalising abortion law. For anyone following developments in Ireland, from the tragic case of Savita Halappanavar to the hatred shown towards Ireland’s Youth Defence group who have been subject to gross smears and allegations, had their headquarters smeared with human excrement and this morning had their website hacked with details of the names, addresses and phone numbers of their supporters published on line, much to the glee of certain pro-choicers, all of this will seem very familiar:

Tomorrow – Wednesday July 10, a silent vigil will be held together with the Good Counsel Network outside the Irish embassy in London, at 17 Grosvenor Place, SW1x 7HR between 4;30 and 7:30pm  (nearest tube Hyde Park corner) in solidarity with Ireland’s pro-life campaign and in prayer for their unborn. This will be a wholly peaceful and prayerful event, attendees are asked only to bring a candle, no placards please. You don’t have to be Irish – anyone can pray for the sanctity of life.

This is to coincide with and add prayers to the vigil that will be being held outside the Dail tomorrow night as the bill is voted upon. Apologies for the late notice, please do your best to either attend or spread the word far and wide and above all pray for Ireland. 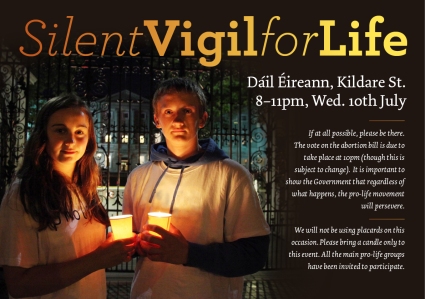