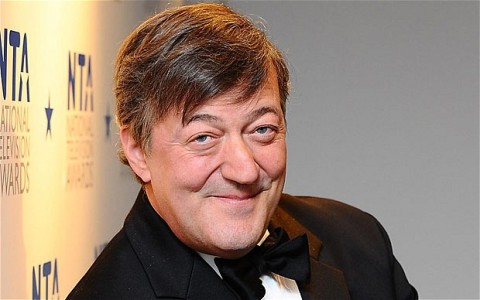 The celebrity witch-hunt following the revelations about Jimmy Savile has cause something of a problematic backlash.

Establishment liberal luvvie Stephen Fry, who couldn’t resist leaking some outrageous tidbits from yet another set of memoirs he’s flogging, said on BBC’s Newsnight, that 14-year-old children who had sex with rock stars were not victims, because even with the benefit of adult hindsight now they are in their ‘50s, they would not categorise themselves as such.

The thing is with sexual abuse is that by its very nature it involves an element of coercion, and therefore even the 14 year olds who thought that they wanted sex with the gorgeous rock star whose poster had adorned their bedroom wall, in all probability probably didn’t.

That’s not wishful thinking. it wasn’t so long since I was 14 and certainly at that stage I had not been party to hardcore porn, the most we did was a bit of teenage giggling over illicit copies of Jilly Cooper. Some of us did get coerced by older boys into doing things which we later regretted (perils of sex being a complete taboo topic at home and school and no-one ever attempting to have any sort of sensible conversation about you with boys and sex) but it’s interesting to note that it was the Lower and Upper Sixth who were conducting relationships with the Fourth Year. In today’s money that’s Year 12 and 13 eyeing up the Year 10’s. In some ways that’s not a new thing, most 14 year olds will believe themselves more grown-up and cool with the attention and flattery of an older boyfriend, especially when one considers that boys tend to physically develop later than girls.

But even when I was a teen in the late ‘80s and early ‘90s, there simply wasn’t the expectation that going out with someone meant that you were having sex with them or having sexual contact, which is perhaps why nobody talked about it. Funnily enough I was having a conversation with someone in their ‘70s the other day who told me that when she was in her teens and twenties she had loads of boyfriends. ‘I couldn’t say that now’  she told me, ‘because everyone will think that I slept with them all because that’s what having a boyfriend means these days. When I was young having a boyfriend meant that you went out with them a few times, let them buy you a drink or go to a dance with them and then when you got bored you’d move on! There was always someone who might try to get fresh with you, but you’d tell them to get lost and warn all your friends about them!’ There may have been stigma about previous sexual partners, but not boyfriends or dating.

Of course teenagers have always been having sex as well as being seen as rife for sexual abuse, but surely in a progressive society, one that recognises that an adult psyche is not fully formed in adolescence we ought to be preventing this? A 14 year old girl or boy is one who is still in the process of maturing both physically and emotionally, and the presence of sexual characteristics does not indicate a psyche to match. An 11 year old who has begun her periods is technically ready to bear children, but no-one in their right minds would suggest she is capable of consenting to a sexual relationship.

An adult is always in a position of power over a teenager and never more so when they are the subject of teenage crush. Even if a 14 year old believes that she wants to sleep with a rock star, in the vast majority of cases she is unable to match him in terms of emotional maturity – there is a world of difference between a 20 year old and 15 year old, let alone a 30 or 40 year old. The older party will have learnt various techniques of emotional manipulation and flattery, the younger party being putty in their hands and very suggestible. The damage which can be inflicted by premature sexual contact ought not to be underestimated.

Bill Wyman aside (whose ex-wife admits that she had sex with him at 14 and bitterly regrets it, accepting that she was still a child), most older men are not interested in a long term relationship with teenage girls, or not a healthy one at any rate. It is a predatory adult psyche that wishes to conduct a sexual relationship with a child or teen who is unable to form a sexual relationships on adult terms. Adults are attracted to teens thanks to a combination of their physical appearance and psychological malleability.

This inequality is why boundaries exist between pupils and teachers or any adults with a level of pastoral responsibility towards children. Abuse is defined as ‘the improper usage or treatment of an entity, often to unfairly gain benefit’. While people are not entities, teenage girls and boys will have their sexuality and psyche harmed by those who violate their boundaries and refuse to respect  and accept their vulnerability.

It’s tempting to give Stephen Fry a free pass because he patently has no interest in teenage girls in the rock star/groupie scenario he would appear to be describing, but the same applies to 14 year old teenage boys such as those tempted into seedy rent boy type scenarios such as those which allegedly occurred at the now notorious Elm Guest House, and who are equally capable of being used as sexual objects by those with specific proclivities. Arguably a boy is even less capable of giving his consent than a girl if he is still coming to terms with his developing sexuality, but both sexes have not really got to grips with sexual maturity at the age of 14 and sex involves the projection and imposition of an adult fantasy on to them.

It’s also rather unseemly and crass to be attempting to grade levels of sexual assault. Regardless of what is done to the child or teen, inappropriate sexual behaviour is being forced upon them, which needs to be treated with the utmost gravity. How this is dealt with in terms of sentencing, is in the hands of the judge taking into account all the circumstances of a particular case that comes before them.

Fry is obviously correct to warn against the presumption of guilt in celebrity abuse accusations before the case has even gone to trial, and blogger Anna Raccoon is worth reading in order to give a balanced account of how some of these cases have been overblown. One suspects that in some cases, money is a motivating factor for people to come forward. Justice demands that all the evidence is properly examined rather than an accusation being enough to secure prosecution and subsequent conviction.

There’s also a delicate balance between ensuring that on the one hand historic sex abuse does not go unpunished and on the other, not punishing people who did not believe that they were doing anything illegal or immoral and were acting according to the sexual mores of their day.

There is something ironic that in these days of unfettered sexual liberalism, social boundaries seem to reverting (and rightly so) to those of a previous era, whereby sexual touching of someone you are not in a relationship with, is a taboo. The ‘60s, ‘70s, and ‘80s seem to have been a time when people were still getting to grips with the sexual revolution, all boundaries were swept aside and literally anything went – everyone was seen as a target or potential sexual partner. Far from being liberated, women were turned into sex objects in a way that had never been so previously overt.

The pendulum is swinging back the other way – society is undergoing a correction. The problem with this is however that we appear to wanting to regulate every single element of a sexual relationship to conform with societal norms, namely frequent partners, but clinicalised, sterilised, devoid of life-giving potential and potential infection.

Fry’s almer mater has already introduced compulsory sexual consent workshops for students. Which begs the question – if 18 year olds are considered unable to fully understand what sexual consent is all about, then why are 14 year olds, regardless of whether their sexual partner is a famous rock star or someone their own age?