One of the insufferable aspects of social media, especially Twitter, is its tendency to shallowness or insincerity – the 140 character format lends itself to superficiality and at times empty soundbites, which is why blogging will always be a better medium in terms of allowing one to work out and explain complex concepts. I often wonder whether Tweets will be studied as a literary genre several generations down the line, the most amusing or profound statements being the modern equivalent of an epigram.

Nowhere is this tendency to make lots of noise better manifest than when we have the death of a major figure such as has happened today, Nelson Mandela. I’m not going to re-hash hagiographies here and now is not the time to lay into him for his failures in terms of governance as well as his liberalisation of abortion law (contrary to the wishes of most South Africans), Fr Alexander Lucie-Smith of the Catholic Herald and Tim Stanley of the Telegraph provide fine, thought-provoking obituaries of this ‘secular saint.’

What bothers me most about the abundance of  saccharin in evidence on social media tonight, is that it is the digital equivalent of the outpouring of grief following the death of Diana, Princess of Wales ,yet even more hollow and meaningless. We are encouraged to think of something terribly profound to say, to mark our loss and then move swiftly on to the next sujet du jour. It is mere noise, the ultimate sound and fury, signifying nothing.

Like mass hysteria, everyone feels compelled to say something, there’s an expectation that every right-thinking person will be wanting to pay their respects and anyone such as Rod Liddle, who expresses an unpopular or controversial opinion is pounced upon for their insensitivity. Admittedly no-one wants a sourpuss, the drunken old relative at the funeral reminding one of what a mean old skinflint Auntie Doris really was with her penchant for too much barley wine, but that’s part of the rich tapestry of life. Dying does not render someone saintly status, nor does it automatically cleanse them of their earthly sins, though we have to remember to exercise charity both towards the living and the dead in our speech. But to criticise someone for not reacting in the ‘right’ way, to hold someone up for public ridicule and attack because they have not behaved or mourned in the way that you think they should have done, reeks to high heaven of Pharisaism and is nothing better than an excuse to make one feel better about oneself.

This is a trait that is all too sadly apparent on the Catholic internet at times, there is far too much monitoring of other people’s comments going on, far too much “look at them over there, not being as orthodox as I am”, “look at those traddies/liberals” (delete as applicable) instead of the real and serious business of attempting to bring the peace of Christ in our encounters with everyone.

But back to Mandela, what is bothering me, is this digital equivalent of tying our bunch of garage flowers to the lamppost, a ghastly tradition which I would be sorely tempted to ban, in the unlikely event of becoming prime-minister. These outpourings of grief, mourning, loss, sentimentality are becoming part of the ritual of mourning, in lives where real-life lived experience and online interaction are increasingly enmeshed. So many of us are wasting so much time idling away on social media (and no need to point out the glaring log in my eye here) we spot someone has died, duly post some sort of mawkish sentiment and then move on to looking at cats or whatever else can distract us from higher pursuits.

An old man of 95 of ailing health has passed away after a prolonged and painful illness. His death has been expected for some time, indeed Fr Lucie-Smith was honest enough to confess that he wrote his piece some time ago, in common with many journalists I should imagine. Nelson Mandela had been out of the public eye for some time, is his death really such a tragic and terrible loss to the average Joe? Will we wake up every morning with a heavy-heart and sense of grief? Or for most of us, is it more a case of “great man, sorry he’s died”? In which case the tributes to a man we don’t really ‘know’ and never really ‘knew’ are a little insulting in their vacuousness. And why the hours of coverage on the BBC? A great elderly statesman has died of natural causes, surely after a few speeches or thoughts from world leaders and some other reactions, it’s time to move on, nothing more to see here. The broadcast media are also indulging and encouraging us in feats of grieving melodrama that would put the Victorians to shame. Perhaps hours of rolling news montages and acres of internet coverage are today’s equivalent of ornate gothic monuments?

The fake tweet purporting to be from Paris Hilton sums up the spirit of Twitter tonight, as do the responses. Ha ha, isn’t she stupid, glad I’m not as stupid as what she is. One should point out that in the morning she will still be fabulously wealthy and incredibly pretty before we get too smug.

I digress. If the death of Nelson Mandela should teach us anything, instead of rushing to react, we should stop, pause and consider his life’s achievements and give thanks for them. He embodied the spirit of forgiveness and reconciliation and instead of worshiping his memory, or posting glib thoughts, a better tribute might be to see how we can emulate that in our own lives and instead of aiming for grand gestures of tolerance towards total strangers, start with the more testing folk close to home, who may have caused us personal harm.

Also can we stop nonsense like this headline from tomorrow’s Sun. 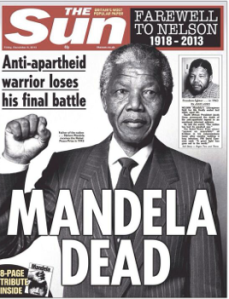 Nelson Mandela has not lost his final battle. Death, especially from geriatric causes, is not a ‘battle’ but an inevitability which comes to us all. We cannot win it, because it has already been won for us by Christ’s glorious death on the cross. Oh death where is thy sting, oh grave where is thy victory. We cannot cling on to life at all costs, we do not approach death as a battle, but with reconciliation and acceptance. As Christ says “For whosoever will save his life, shall lose it; for he that shall lose his life for my sake, shall save it.”

And finally, this may be lovely, poignant, tender, moving and funny  from tomorrow’s Times, but can we also cut it out?

Just as we cannot consign souls to hell, neither can we guarantee that they are going to heaven. Hopefully Nelson Mandela will end up a saint (with a small s, as it is highly unlikely that he will be canonised by the Catholic Church, though never say never) but we have no guarantee. To depict him as a saint does him no favours as he is still in need of prayers and  has whiffs of the diabolic in that it could prevent genuine prayer for him. This is what is so insidious about our current culture that fears and hides from death, in that once someone has died they are assumed to be enjoying the fruits of paradise, in order to comfort the living, which is in direct contravention of Catholic teaching. We cannot forget our responsibility to pray for all the dead.

And this is why the brief fake outpouring of grief and cloying sentiment is so damaging, because it distracts us from our very real obligation to pray for the dead as a work of mercy. Be sad for his family, be sad for South Africa, acknowledge the contribution he made to genuine equality, but keep things in perspective.

Like Nelson Mandela we too will die and on that terrible day of judgement, God isn’t going to be interested in tasteful and moving cartoons, rolling news coverage, front page headlines nor the amount of florid tributes written in haste by random strangers on the internet.

(PS, perhaps I’m being unashamedly grouchy and fierce because 5th December marked the first anniversary of my Nana’s death. She died not having received the sacrament of reconciliation for at least 40 years and having forgone her previously regular Mass attendance being solely reliant on others to take her. I pray fervently every single day.)

3 thoughts on “Pray for Madiba”