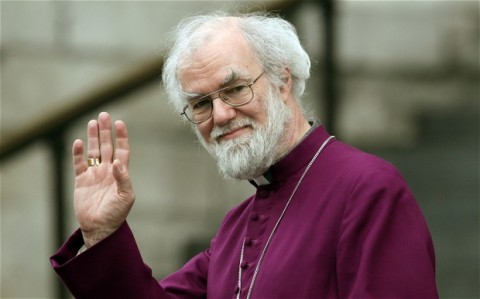 A few days ago a lovely young non-Christian girlfriend of mine messaged me on Facebook. “Would you ever consider getting a nine to five job?” she asked. “Sure”, was my response, “I’ll need to get a job at some point, but probably not until all of the children are at school”.

“Aren’t you worried” she said, “that your views on gay marriage will hurt you?”. Very telling from someone who has been, if not an advocate of “gay marriage”,  has certainly openly supported it, seeing no problem with gay marriage in a civil context, but vehemently disagreeing with those who would wish to have it imposed on religious institutions.

She has a good point. The two professions which I have oscillated over entering over the past few years, namely midwifery and teaching, I have to accept are no longer avenues that would likely be open to me on account of my views.

Recently there has been a ridiculous furore amongst Catholics (who should frankly have better things to do with their time) on Twitter over the use of pseudonymous tweeting and blogging. One tweeter, whom I shall decline to name, has been leading something of a one-man crusade against “sock-puppets”,  demanding that every new pseudonymous account provides him with their name and address and some form of credentials in order to prove that they are not in fact, a ‘fake’. Anyone who declines to do so, is instantly decried and publicly denigrated as a fraud,  pseudonymous tweeters should, in his humble opinion, be banned, either one should tweet in one’s own name or not at all. If you have something to hide, then you should not be on Twitter,  Catholics should be out and proud, happy to be derided and martyred for their views along with the likes of St Thomas More.

Which is all very well, but what when those views could seriously interfere with one’s job prospects, or result in your being sacked? I can well imagine that if I was still in some of my former jobs, this blog would result in my dismissal on the grounds of gross misconduct. Not that I have said or done anything scandalous, but simply being ‘out there’ as an opponent of things like abortion, surrogacy, IVF and gay marriage, would cause colleagues to feel uncomfortable, as though they were being ‘judged’ and an employer may consider that their reputation could well be damaged as a result of having an employee who held such scandalous and counter-cultural views.

It cannot be much of a surprise that the majority of non-clerical Catholic tweeters and bloggers employ pseudonyms which they zealously guard; being considered up there with St Thomas More is wonderful, the consequences of which may not be martyrdom, they could certainly impact on others such as vulnerable young family members. While losing your job may do wonders for one’s Catholic credentials, it doesn’t exactly put bread on the table for your children and certainly will affect one’s future job prospects. I wonder whether even a company like Tescos, former sponsors of Gay Pride, would give you a job stacking shelves in these days where one’s name and entire history can be easily googled?

Clearly, unless one has a ‘Catholic’ or even ‘Christian’ job, it’s inadvisable to be open about one’s faith on the internet. It’s not the same as being shot at in Eygpt or beheaded in Syria, but free-speech is limited for serious Christians, like it or not, which is in itself a form of persecution. Should Adrian Smith, the housing officer who was demoted over comments made about gay marriage on his personal Facebook page, have simply shrugged his shoulders and “grown up” as the former Archbishop of Canterbury would appear to suggest?

What about the pro-life GP hounded off Twitter by the Irish pro-abort crowd who reported him to the GMC and NHS because using his real name, he expressed pro-life views? Should he too just accept that his beliefs are incompatible with his profession (to save lives not take them) and therefore his freedom of expression is limited and he should just ‘man-up’?

Freedom of expression, is clearly not as serious as threats to livelihood, but it is very much tied up with freedom of association and the right to earn a decent wage in the profession of one’s choice.

Being a Christian is not just a ‘hobby’, it’s not like being a Stars Wars fan, or doing the odd bit of voluntary work, we are compelled to live our faith, which is more than simply going to Church on a Sunday or holy days of obligation and keeping our mouths firmly shut the rest of the time. Faith is not simply that funny habit which mummy and daddy have that we take out of a box and parade as necessary before putting back, but something that needs to be lived, daily, in our thoughts, in our words and in our actions. Faith is not something we leave in the pews on a Sunday. We are commanded to evangelise, and part of that has to be, at some stage, expressing our views, grounded as they are in compassion, hope and charity, not keeping our mouths shut out of fear. Obviously there is a time and a place to do that, no-one wants to be pounced on by fierce evangelisation, a colleague quoting Revelation and fire and brimstone at 9am round the water-cooler on a Monday morning, but neither should we be afraid to put forward or propose our views in the public square, as appropriate.

But increasingly, that is what we are having to accept and what the likes of the National Secular Society are wanting to impose upon us as well as removing our rights to educate our children in accordance with our faith.

I have to accept that even if I were to delete this entire blog tomorrow, due to my Catholic Voices work and my writing for the Catholic press, any future employment prospects outside of the Catholic or pro-life sphere, are limited.

Rowan Williams misses the point when he tells Christians to grow up if they are made to feel uncomfortable or made fun of.  When you look at my most persistent trolls and aggressive interlocutors, the verbal violence has stemmed from the fact that they are made uncomfortable by my writing. By rejecting their views and offering an alternative, I am, by their logic, rejecting them, rejecting their lifestyle decisions and by not unconditionally agreeing that abortion, gay marriage, promiscuity or whatever else is perfectly acceptable, I cause enormous amounts of anger and hate to be directed at me.

Surely it is those who cannot accept that everyone will approve of their choices, who should grow up, instead of seeking to silence opponents?

Whatever the answer the fact that Christians are increasingly afraid to speak out under their real names on the internet (my mother is terribly anxious as a result of my writing), the fact that some feel silenced at work and that faith can prove a barrier to gainful employment in a chosen profession, is in itself a form of persecution. Whilst it’s helpful to keep this in perspective and remember that the situation is not as dire as in other parts of the world, we should not succumb to victim top-trumps, but neither should we deny that this is happening, turn a blind eye, shrug our shoulders and giggle whilst people are losing their livelihoods or are too scared to speak their minds.

Injustice is injustice, regardless of the semantics that one wishes to employ to describe the situation, but to try to pretend it is not happening, in a vain attempt to shore up our existing position and win popularity, is to co-operate in our own persecution. Losing your job for refusing to teach secular sex ed or gay ‘marriage’ might not be up there with getting one’s head cut off for apostasy. But that’s scant comfort to those who are in the firing line. Being disbarred from a job is more than feeling ‘mildly uncomfortable’.

Next time someone tries to smear my mental health or imply that my children are at risk and should be removed as a result of my ‘homophobic’ and pro-life views, as has happened frequently in the past, I’ll just giggle. I’ll accept that we could never be considered as suitable foster parents and give some temporary stability to needy children later on in life, due to our faith. Next time I see a job advertised that I could do with my hands tied behind my back in a local authority or a non-Catholic institution in Brighton, I’ll accept that it’s pointless to put in an application. It’s all my own fault for expounding my Catholic views in public, in today’s tolerant society.

If being grown up is about accepting, condoning, ignoring and laughing at inequality of opportunity as a result of faith, I’d rather be an idealistic child. Of course, when one’s entire ministry has consisted of serving God, when one’s religious views have led to positions within the highest echelons of academia at one of the country’s most prestigious universities and indeed when one as risen to the highest possible rank within one’s church, it is naturally very difficult to conceive of what persecution might look like for your rank and file Christian countryman.