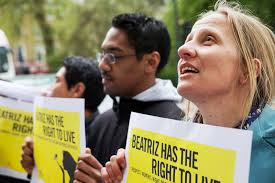 (The above photograph is taken from the website of Amnesty International who claim they have no official position upon when life begins. A Human Rights organisation that is unable to decide upon who is a human being. Interesting)

Sometimes a truly hard case will hit the headlines which will test the conviction of every seasoned pro-lifer such as the one in El Salvador, which will be seized upon with a ruthless and determined glee by abortion advocates, especially I suspect, the Irish hardcore contingent who seem to populate Twitter, pouncing, hounding, persecuting and generally attempting to bully and intimidate any pro-lifers with campaigns of harassment, such as the recent one which saw a Catholic pro-life GP delete his Twitter account under threats of having been reported to the GMC for having the temerity to express his views. These are the same people who will tell non-Irish to keep their noses out Ireland’s business, but are happy to report a UK GP to relevant authorities, including his employers because they are unable to accept that he should be able to express his views, alongside his identity. A country which has pro-life laws is the concern of every right-thinking global citizen, whereas one which is proposing liberal abortion laws is only the concern of its inhabitants, according to this logic.

The facts as reported by the BBC, is that a young woman (Beatriz) who is suffering from the chronic immune system disorder lupus and kidney failure has been denied permission to abort her baby which has been diagnosed as suffering from anencephaly, which means that either part or all of its brain is missing and he or she is likely to die shortly after birth. The Supreme Court has rejected her appeal to be allowed to abort, stating this:

“This court determines that the rights of the mother cannot take precedence over those of the unborn child or vice versa, and that there is an absolute bar to authorising an abortion as contrary to the constitutional protection accorded to human persons ‘from the moment of conception’.”

This is a tragic and shocking case, one cannot fail to feel sympathy for the poor woman, who must, with some justification, feel as though her country is totally lacking in care and compassion for her physical and mental wellbeing. It highlights the problem of using legal and technical language which is very precise and conveys a total lack of empathy, feelings matter, this young woman is important, her plight is desperate and some acknowledgement of that, along with reassurance is necessary. The judge may well of course have added some words to that effect in their statement, which have not been reported, but this to me highlights the importance of women, especially those hurt by abortion, those who have been in crisis pregnancies and mothers, speaking out in defence of the unborn. Whilst the legal terms and the moral theology is important, when delivered by a man, they can leave the impression of coldness, sterility and a total lack of empathy. Women and mothers intuitively understand what’s at stake in these situations.

Make no mistake, Beatriz must be going through hell and needs support. Pregnancy does put an additional strain on the body, especially in terms of the immune system and kidney function and there can be no doubt that her physical health is being severely compromised. She will probably be experiencing a great deal of physical pain and trauma, compounded by emotional distress, feeling as though she is being forced to put her life on the line or even die for a baby who is going to die anyway.

But what we see here, as in so many awful cases, is the conflation of two conditions, which go to demonstrate that hard cases make bad law. The baby’s long-term prospects should not affect the decision of whether or not one should be able to kill him or her. We do not euthanise people on the basis of a poor long-term prognosis. Anencephaly is an undeniably terrible condition, one that every pregnant mother lives in fear of, prior to scans. I know that if I had a baby diagnosed with it, I too would struggle and need a lot of support. But being one of those ‘extremists’, I treat all my children equally regardless of whether they have yet to make the journey out of the womb. I would chose for my child to have a chance of life outside of the womb, no matter how brief, and die surrounded by the warmth and love of my arms instead of being dissected by the cold hard steel of the abortionist’s instruments or poisoned in utero, because that would be no less than they deserve. It would also aid in the grieving process, so many parents who feel compelled to abort their children on the grounds of disability struggle as a result, especially as they are encouraged to hold a funeral service for the child whose life they put an end to. I’m not knocking the practice, treating remains with respect and praying for the dead is the right thing to do, but it causes severe cognitive dissonance and distress. Healing in these cases is much harder. The parents of Colin Perry are beacons of hope to parents of anencephalic children.

In many ways El Salvador is a model of equality, not allowing for the elimination of those with disabilities. The really pressing issue here is maternal health and this is what matters for Ireland and other pro-life countries. In Ireland, if the mother’s health were at severe risk, the medical code already in existence would allow for an abortion to take place in these circumstances.

It seems that Beatriz’s case is being used by various activists in an attempt to push open the door to abortion, exploiting the plight of a sick woman in an unsavoury fashion.

Beatriz is now 26 weeks pregnant, doctors are concerned that as her pregnancy progresses further, too much strain will be put upon her body and they will be unable to treat her. That is a wholly justifiable concern. Beatriz does however, already have a toddler, it’s not clear when she was diagnosed with Lupus, but her body has already been able to tolerate giving birth at, or near to, term.

What I don’t understand about this case is why Beatriz has needed to be dragged through the courts in this fashion which can only add to her distress. Surely the most sensible, compassionate and morally licit option would have been to induce the baby at 24 weeks, the point of viability and do all that they can to provide palliative care for the child? The intention not being to abort the baby but to relieve the pressure being put upon Beatriz’s kidneys and immune system, particularly if they are showing signs of strain. Isn’t this what any conscientious doctor would do, regardless of where they stood on abortion?

Beatriz seems to have been used as a political football here, an early induction post viability is not the same as the deliberate and wilful destruction of life. This has to be the most medically and ethically astute option. Why can she not be monitored and an early induction take place at the first sign of strain upon her body? This option would not be incompatible with the ruling of the judges, and is good clinical practice. Why is this option not on the table and why is an abortion being pushed in this scenario, which would not be the most compassionate outcome, for mother and baby alike. Love them both. Let the baby be born and die in dignity, he or she and Beatriz deserve no less.

According to a report in LifeSite News on 9 May, Beatriz’s condition has not required hospitalisation, she is being treated at home. This casts a wholly different complexion on claims that her life is in imminent danger.

One thought on “Tragedy in El Salvador”