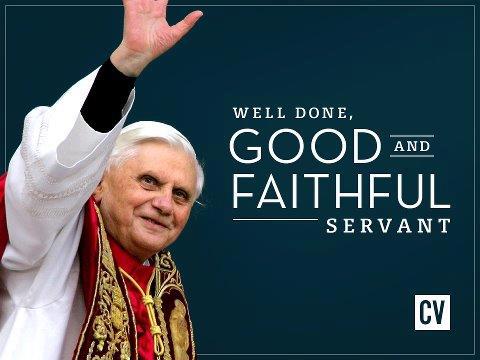 Like everyone else, I’m still reeling from this morning’s shock announcement.

Whereas many Catholics of my age would perhaps describe themselves as members of the JPII generation, my family are all definitely Benedict’s babes. His was the pontificate under which not only I returned to the faith, but his apostolic letter of 2009, Anglicanorum Coetibus, issued incidentally on the day I was expecting Robin and I’s first biological child, was one of the key pieces of the interlocking puzzle pieces that formed the arrow signposting Rome, which eventually led him home.

Others will write the erudite hagiographies, my feelings are those of sadness, admiration and anxiety.I think there is genuine reason to believe that the Pope’s health has taken a significant turn for the worse. I was struck by his frailty this morning, both his general demeanour and tone of voice seemed diminished, he seemed cowed under the weight of a burden. The timing of this announcement is highly unusual, coming just before the major event of the Liturgical Year and perhaps significantly, on the feast day of Our Lady of Lourdes and the world day of prayer for the sick. I don’t think we can discount the fact that the Year of Faith, an initiative instituted by His Holiness, is not even half-way over. Timing wise, October would seem more opportune, when there is not that much happening liturgically speaking. Though our Holy Father is not one for vanity, eschewing the showmanship of his predecessor, surely it would have made more sense for him to have exited on a high, with renewed enthusiasm amongst the faithful for the New Evangelisation? One cannot help but wonder whether or not Benedict is facing a potentially catastrophic health difficulty? There can be no doubt that this was a decision of the utmost gravity, Scott Hahn’s observations on Benedict’s repeated visits to the grave of Pope Celestine V, were not just symbolic clues (I’m personally wary of the Dan Brown nature of such claims) prefiguring today’s announcement, but Benedict reaching out to his predecessor and asking for his intercession and guidance if and when the time came.

Though Pope Benedict is not deceased and thus obituaries or reviews of his papacy seem premature, it is likely that there will be no more public appearances of this great man, he will retreat into the solitutde that he craved following the death of John Paul II, when he thought his period of service might well be drawing to its close. Few will begrudge him his well earned retirement, but many will miss his presence and not least the direction in which he seemed to be leading the liturgy, it was becoming increasingly clear which way his preferences lay.

The Pope’s visit to the UK, culminating in a magnificent, beautiful and reverent Mass at Cofton Park, paved the way for the then forthcoming new translation of the Mass and the liturgical renewal, the fruits of which are now becoming apparent. Let us hope that the liturgical reform that he directed and the Renaissance of the Old Rite which he allowed to flourish, is not stopped in its tracks and that his successor can exercise similar generosity.

I hope history will be kind to Pope Benedict XVI, it is far too early to assess what impact his pontificate will have, but for me the hallmarks of his papacy have been generosity, (Anglicanorum Coetibus and Summorum Pontificorum), wisdom – three must-read encyclicals, Deus Caritus Est, Spe Salvi and Caritas in Veritate which offer a blueprint for Christian living and a response to the challenges of unchecked and rampant capitalism, and a deep compassion and humility – of which today’s announcement was the embodiment.

The great tragedy of his papacy is that it has been overshadowed by the child abuse crisis, one not of his making and which ironically he did the most to address. What has failed to capture the media’s imagination is the amount of times that the Pope has spoken about the injustice of poverty, the plight of the poor and the starving, denouncing the West’s failure to get to grips with these issues on several occasions. He has, for the most part, been silent about the traditional hot-button issues regarding sexuality, where he has spoken it has simply been to reiterate Church teaching, such pronouncements being seized upon, blown out of all proportion and quoted out of context by the usual suspects in the mainstream media.

For me, the high points, alongside the obvious UK visit and Anglicanorum Coetibus, were his visit to Benin and his visit back to his home country of Germany where he blew the German Parliament away with a lesson in Natural Law. His interview with Peter Seewald in Light of the World, the longest and most in-depth interview ever given by a Pope to a journalist, revealed the academic, deeply thoughtful and compassionate Pope, whose every word was carefully measured and yet who still retained, what Bishop Kelly today described as an “undergraduate humour”.

The current media climate feels similar to that surrounding the run up to the Papal visit, all the old prejudices and canards about the Catholic Church are being once again wheeled out, with dismaying ignorant puerile articles which seem to express surprise that the Pope was indeed a Catholic and hope that the next one will have more sense. We have the same ageing suspects making their appearances in the media with their tired old tropes and one hopes that the press will behave more responsibly than in 2010 which risked creating a dangerous climate of hostility and hatred against Catholics which could easily have turned into violence. Though Johann Hari is now silenced, no doubt other young ingenues will be lining up to implore Catholics to elect Lady Gaga as Pope as the only way to resuscitate our allegedly ailing, misogynistic and sex obsessed church, though those people who are obsessed with Catholic teaching on sexuality tend not to be the active members of the faith. That said the media does seem to have softened slightly in its attitude towards him – his personal holiness, authenticity, integrity and flawless reasoning and logic shining like a beacon in contrast to the slippery slime and murky filth that clings to most prominent contemporary politicians. It’s hard to imagine Pontifex engaged in petty Twitter squabbles or employing smear tactics, he leads by example with short messages proclaiming Christ’s message of love and hope.

I had already been planning to read Joseph Ratzinger’s three biographies of Jesus as part of my Lenten efforts, I will do so now with renewed vigour intermingled with sadness that such a towering intellect will no longer be the Vicar of Christ. His loss is palpable and we can only pray that the Holy Spirit gives us an equally worthy and magnificent successor.

Pope Benedict began his papacy with the epithet of God’s Rottweiler. He leaves us as a trusty German Shepherd. For most of my formative and adult years, John Paul II was sadly a shell of man, someone to whom it was difficult to relate – he went from being the movie star caricature of Spitting Image, to an ailing old man who seemed to have lost most of his faculties overnight and so for me, Pope Benedict feels like the only Pope I have ever really ‘known’ and certainly loved. It is a matter of deep sadness and disappointment that his papacy will not see the ordination of my husband, but it is his papacy that has brought us both back home, it is his papacy that has reinforced the timeless truth of the universal church and that has sown the seeds for a fuller and more deeper appreciation of our rich cultural heritage as Catholics, and for that I will always be profoundly and immeasurably grateful.