Allison Pearson’s column in yesterday’s Telegraph gives pause for thought if one has children who are attending a mixed-sex school. In the absence of many single-sex state schools, not many people are able to afford private single-sex schools or to be able to give up an income to home school. As Pearson says, if this happens in an upper-class boarding school, it’s going to be happening in schools up and down the country.

It is scandalous that one the one hand parents are being asked to take responsibility for their children’s internet, politicians seem to be finally waking up to the fact that we live in an over-sexualised society and yet on the other parents are actively excluded from information pertaining to their children’s sexual health decisions.

Is it really such a consistent idea to be encouraging teenagers to be experimenting with sex so long as it is with each other and ‘consensual’ whilst at the same time acknowledging that children are exposed to unprecedented amounts of sexual pressure, regardless of their gender. How is encouraging children that it’s perfectly acceptable to sexually experiment with each other without their parents’ knowledge or consent going to do anything to address sexual exploitation? We are already seeing plenty of cases whereby young teens are abusing even younger children – telling children that perhaps they should try oral sex or mutual masturbation instead of full penetration is hardly conducive to a society that wants to protect its youngsters.

And before anyone moots yet more education is needed, take a look at this: 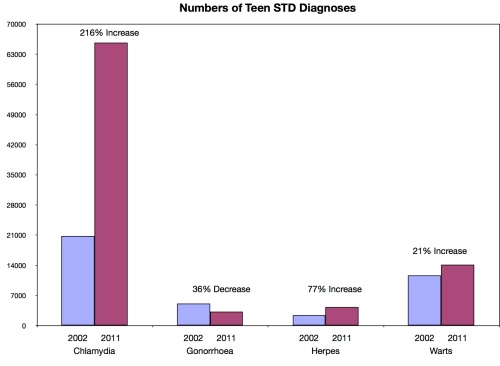 The figures are from the Health Protection Agency and are an amalgamation of the under 15 and 15-19 age brackets. Diagnoses of gonorrhoea have decreased which is a good thing, seeing as there is a worrying outbreak of an antibiotic resistant strain, which seems to be on the increase in the US, but the rest of the figures don’t look so great. I haven’t included cases of syphilis in teens because the numbers are too small to register on the scale, but it should be noted that between the years 2002 and 2011, diagnoses of this disease in teenagers increased by 96%. That our young people should be battling this potentially fatal and wholly avoidable chronic condition is absolutely horrifying.

When it comes to teenage pregnancy rates, the numbers state that the under-18 conception rate is at its lowest since 1969. This is obviously very good news, but it is not indicative that the teenage pregnancy strategy was in any way successful, in terms of teenagers’ sexual health, indicated by the chart above. When talking about the teenage pregnancy figures, we need to remember that the under 18 conception rate is for the age ranges 15-17. As Professor David Paton points out, the under 16 teenage pregnancy stats have seen little change between 1969 and 2012, fluctuating between 7 and 10 girls per 1,000 every year. In any event, even with the drop, the UK teen pregnancy figures are still amongst the highest in Western Europe, before we all start congratulating ourselves.

What is evidently happening is that more or at least the same amount of teenagers as previously are having sex, most of them are using long-acting reversible contraceptives or hormonal contraceptives like the pill and thus leaving themselves open to disease. The Health and Social care Information centre reports that the 16-19 year old age group had the highest number of attendances at contraceptive clinics of the entire female population and that oral contraception was the primary method of contraception for 45% of women who attended.

Clearly something is going awry with sex education in this country and it doesn’t take much to figure out what. More on this anon.