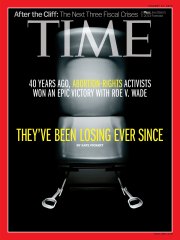 Last year, I wrote extensively, both on this blog and in two pieces for the Catholic Herald, that the tide was turning for the pro-life movement.

This very point has been proven by the latest cover of Time magazine, which admits that since the phyrric victory of what was Roe v Wade, the pro-choice side has been fighting a losing battle, with Emily Buchanan writing what I have been saying time and time again – pro-life and feminism are not mutually exclusive.

I think one of the refreshing things is the breed of new activists that we are seeing in the UK. Whereas as recently as five years ago, pro-life advocates were seen as retired men and women in their late 60s and early 70s (not that age or gender should preclude anyone from standing up for the rights of the vulnerable), more often than not, the person that you will see praying outside the clinic will be in their early twenties or thirties, in line with a younger, fresher breed of advocates that we are seeing in the UK.

As I said, age or gender should not be an important factor but in terms of the personal outreach, women, particularly those who have experienced an unplanned pregnancy of their own, life as a single mother and especially those who have experienced the loss of abortion, are often better placed to counsel those in difficult circumstances. Empathy is often sneered at, but you need to have a heart for pro-life work, it is not simply an intellectual or ideological exercise.

But in an age where image seems to be everything, the fact that we have young, fresh faces campaigning for the unborn should fill us all with renewed hope. We have a new generation with the blessings and energy of youth, able to use imaginatively the new technology and all the tools at their disposal to spread the pro-life message and also to pass it on to future generations. That these people look great is even better. It’s why they manage to inspire such anger – whilst the general public tend to dismiss those who are clearly of another generation or culture, such as the retired stalwarts or those in clerical or monastic attire who attend vigils, it’s much harder to dismiss those who seem like ‘normal’ people on the outside.

It’s very hard to call someone out as a ‘weirdo’ when their appearance contains reflections of your own normality or aspirations and that’s why it inspires such anger. Young pro-lifers threaten and challenges existing preconceptions whilst foreshadowing the future. There is a definite trend or sea-change in the air, which is why the feminist lobby will cling on to their tired and anatomically and idiomatically incorrect old slogans involving wombs, rosaries and religious paraphernalia.

That’s not a clarion-call for young good-looking bods in the movement which should have room for all, but simply an observation. Even more challenging is the attractive young pro-lifer using the rosary for its intended purpose. Whoah, what’s that all about?!! Which is one of the many fruits of the 40 Days for Life campaign, uniting all those with common purpose in prayer.

The Alliance of Prolife Students is launched next week. Let’s equip people to be proud advocates of the unborn, let’s get this topic out in the open, it’s time to re-gain some ground from those who would wish to make the subject of abortion a taboo, closed issue, all about personal choice and not up for discussion. Whilst experience is invaluable in terms of outreach, youth should not be an impediment for bearing witness to the truth – abortion is the wilful destruction of life and the greatest injustice in today’s society, with 200,000 lives lost a year. And where better to start spreading the word, than in places of academia, where a free and frank exchange of ideas and discussion should be welcomed and encouraged. Let’s get people talking about this in bars, coffee shops, libraries, student halls of residence and later on around water coolers and in places of work. Let’s dispel the fear and stigma of being thought ‘judgemental’ for expressing the basic right to life of all human beings.

The future is young, bright and it’s orthodox. No wonder pro-choicers are on the run. Let’s give them a real run for their money in 2013.

8 thoughts on “Pro-life, the times they are a-changing.”