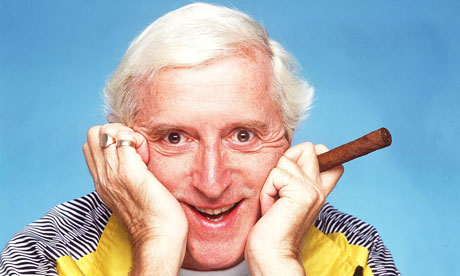 The torrent of indignation flying from high profile Catholics at the Telegraph,in the direction of the BBC following the revelations about Sir Jimmy Savile is unfortunate and insensitive. Motes and beams comes to mind. We are still trying to heal and come to terms with what went on in our own beloved Church, accusing other organisations so pointedly, may not be the most prudent of moves.

The BBC undoubtedly does have a case to answer, in terms of whether it did cover up or ignore any allegations regarding the former star and it also needs to make public the relevant documentation and emails surrounding the suppression of the Newsnight report, which would have brought the allegations to light.

The inevitable parallels have been drawn with the abuse scandal that the Catholic Church has had to deal with, but there are some differences, such as the Catholic Church does not rely on a compulsory tax levied by the government for its existence and we are only dealing with the alleged abuse surrounding one particular star.

Of more interest is the similarities between the two organisations. Everyone likes to think of the Catholic Church in terms of “The Vatican”, believing it to operate in a similar fashion to the Labour Party under the expert hands of Peter Mandelson and Alistair Campbell, but the reality could not be more different. The Vatican consists of a myriad of different departments, consisting of hundreds of staff, both lay and clerical. Anyone who has had any dealings with the Curia will know that administration tends to be interminably slow, simply due to the complex number of channels various documents and procedures have to go through, although they are thankfully in the process of modernisation. Only yesterday Fr Alexander Lucie Smith complained how the Vatican museums need to catch up with the rest of the world. It took the Catholic Church far too long to get to grips with the abuse scandal that shamed us all.

Whilst the same claims could not be made of the BBC in terms of technological advancement or ease of communications, in fact one could argue that its much easier for the BBC to keep tabs of its employees, especially when one compares the size of the corporation to the sheer numbers of members of the Catholic Church spread throughout the globe; they are both similar in terms of trying to keep track of each individual diverse employee or associate. So for example, allegations have spread that Saville’s abuse was an “open secret”, i.e. various chauffeurs, make-up artists and production assistants knew of his propensity for wandering hands and his eye for the young girls, in the same way that perhaps members of the congregation may well have had suspicions about members of the clergy.

But that is not the same as the BBC having definite evidence of Savile’s crimes. Now the allegations have surfaced, various other pieces of the jigsaw are coming to light, such as his involvement with the Jersey children’s home which was investigated for abuse or his associate with Duncroft Approed School in Surrey, but hindsight is a wonderful thing. Various employees having their suspicions about Savile’s proclivities does not equate to an enormous conspiracy at the BBC. A chauffeur or production assistant may well have noticed something untoward, a surreptitious fumble or grope, but that does not mean that they would have reported it either to their superiors or more importantly the police, especially if the subject of his attention did not seem to be uncomfortable.

By Savile’s activities being an open secret, I suspect what is meant is that he had a reputation. Which is why the BBC never held any investigation or enquiry into his actions, simply because without any formal or even informal complaint or specific allegations it is very difficult to take action. It is probably quite likely that this did go to the top, in as much as producers and directors would have been aware of his reputation, but if one remembers the era and social climate surrounding Savile’s rise to fame in the sixties, then it is hardly surprising that a blind eye was turned to any underage philandering in a time that was all about the breaking down of sexual taboos. So long as the jangling jewellery pulled in the millions of viewers and listeners, then who really cared?

As we now know, sexual abuse was allowed to run unchecked in the 60s, 70s, 80s and 90s in a number of institutions, schools, children’s homes, Scouts, the Church of England, the Catholic Church and now, we learn, the BBC. That does not make the abuse acceptable nor should it colour our response to it, but historical context is important. Even as the recent report on the child abuse that occurred in the Anglican diocese of Chichester makes clear, organisations are still struggling to ensure that appropriate child protection measures are in place, something that the Catholic Church in the UK pioneered, following the publication of the Nolan Report, which is now widely accepted as the gold standard.

The BBC, like the Catholic Church did not deliberately oversee or enable deliberate and systematic child abuse. The truth of what went on will be more nuanced, involving failures of reporting and communication, alongside the wilful misbehaviour of any individuals. What investigation into the abuse crisis in the Catholic Church has demonstrated is that incidents of abuse steadily increased throughout the sixties and seventies, and declining rapidly by the noughties. In common with what seems to have happened at the BBC, there was a substantial delay of the reporting of the sexual abuse, with many incidents still being reported as of today, but they continue to fit into the distribution of abuse incidents concentrated in the mid 1960s-1980s. Savile’s alleged behaviour seems to fit in with this.

Fortunately society has moved on, there has been a substantial increase in knowledge and understanding about the methods, psyche and treatment of sexual offenders and the harm that sexual abuse causes, changes have been made to all institutions or employers who are responsible for children, safeguarding measures have been implemented, legislation has been passed and most importantly attitudes have changed and we are all now far more vigilant and aware of these issues, in a way that we were not when Jim was fixing it for millions. The fact that an authority figure might have a penchant for young boys or girls is no longer seen as a harmless or worse still, amusing, foible.

What the BBC is experiencing, is similar to what the Catholic Church had to go through and perhaps there could be some lessons to be learnt, these things must not be brushed under the carpet and the y shame us all. The BBC, like the Catholic Church needs to thoroughly examine its history, procedures and culture and where necessary make amends and reparation to the victims. All of its dirty dank recesses, need to be held up to the purifying light and it must get its house in order.

What isn’t helpful is to indulge in the hysterical accusatory language that the BBC was somehow involved in a giant conspiracy to enable widescale rape and cover-up, particularly when the facts are not yet known. We as a Church did not like the factually incorrect hyperbole surrounding the Papal visit in 2010, we need to shy away from calumny and detraction and above all offer our sympathy and prayers to the victims. We also need to remember that though our memories of Jim’ll Fix will now forever be tainted, in my case I never forgave the show after they ignored my letter, actually Sir Jimmy Savile was by all accounts, not a pedophile abusing the children on his show, but a hebephile, a necessary but important distinction. That’s not to apologise for or lessen his behaviour in any way, but to state that it’s unlikely he would have targeted those on the show, who tended to be of a much younger age. We were not sending our children off to be abused by him on live TV, despite what some of the more emotive tabloids would have one believe.

Finally, we should remember, that heinous though Sir Jimmy Saville’s alleged offences were, he did also raise over £40 million for good causes and dedicated a substantial amount of his time and energy to helping the less needy and fortunate. That’s not to excuse him in any way, but to point out, that the pathologising of sexual offenders that makes for good copy is rarely nuanced or helpful. As the life of Sir Jimmy Savile indicates, there is capacity for enormous good and enormous evil in all of us, it is rare to score so highly on both sides of the spectrum, but it seems that he was a troubled and conflicted man. capable of altruism and evil in equal measure.

As a wiser, infinitely more saved person than me pointed out yesterday, Sir Jimmy Savile was a Catholic, we should all pray for his immortal soul.