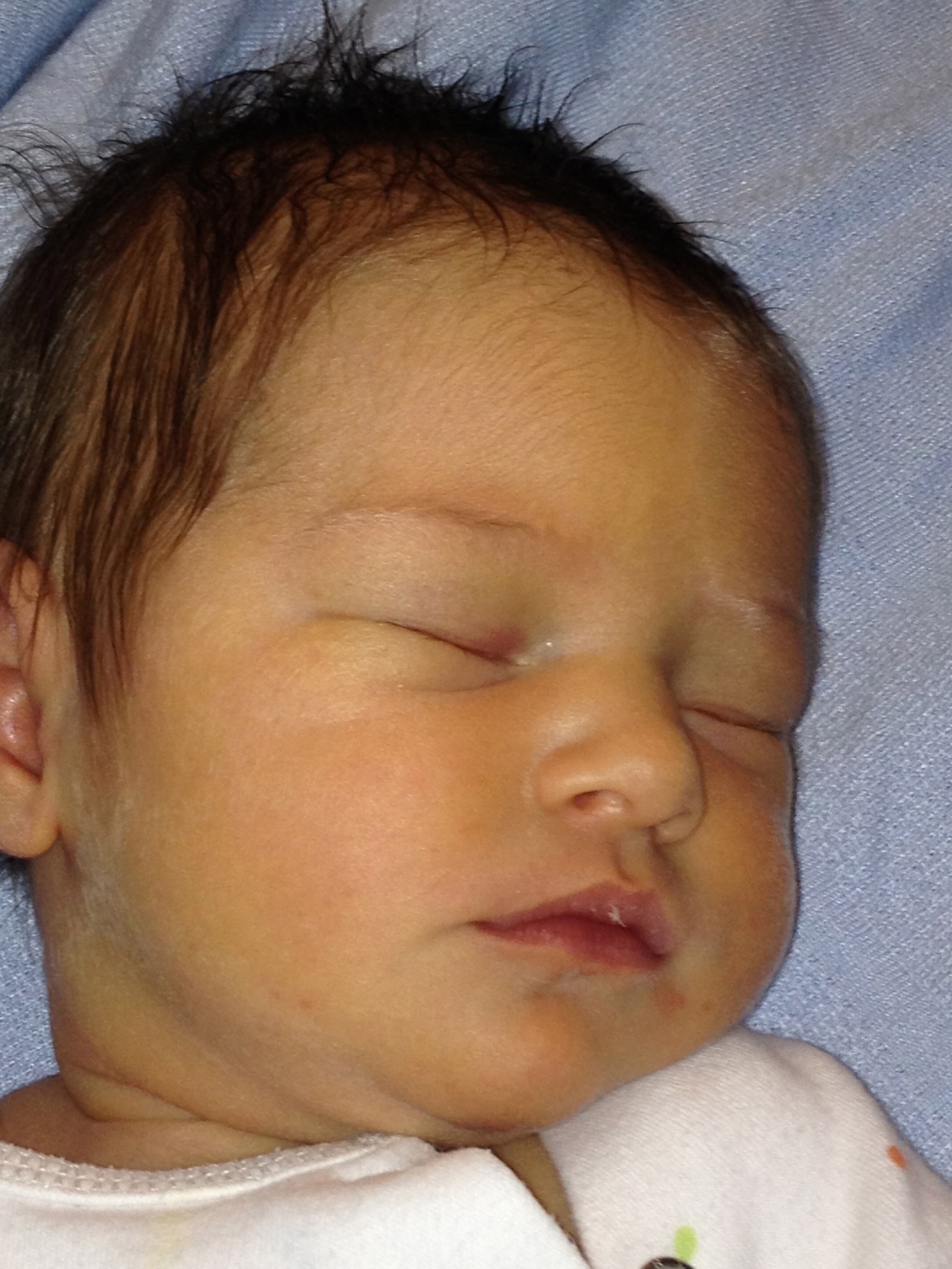 Apologies for the tardiness in posting an update, I’m just beginning to emerge from the post-natal fug. Theodora Mary Elizabeth was born on Tuesday 21st August 2012, at 3:57 pm, weighing 5lbs, 11oz, or 2580g in new-money.

Due to the high blood pressure problems that I suffered from in the latter part of pregnancy, Theodora is on the small side, especially when compared to all my other babies who weighed in at over 8lbs and sported gorgeously plump cheeks, arms and legs, so it is something of a shock having a baby who seems so absolutely tiny with not an ounce of spare flesh, with spindly lean limbs, but she is in good health, if a little jaundiced still and the pair of us are just hopefully coming out of the woods.

As for her name – it was one of those “lightbulb” moments. Right up until the moment of birth, we still had no definite idea of what to call her, other than a few ideas vaguely floating about. Theodora certainly did not feature on “the list”. It was during recovery, whilst Robin was having a cuddle, that he looked down tenderly at her, marvelling at her tiny, yet perfectly proportioned size and remarked that she really was a “teddy”. “Teddy – Theodora?!” I said, whereupon we just looked at each other and something just clicked. It just felt right, it was her.

When I suspected that I might be pregnant, the timing could not have been worse. I had just passed my first term’s assignments at university with flying colours, having had to defer my much-wanted place once already due to an unplanned pregnancy. I knew that another pregnancy would make continuing unfeasible; I struggle with pregnancy sickness and hormonally related depression and there was no way that I would be able to mange 3 children under 3 and the demands of a full-time course, let alone the costs of the university creche for 3 children. Added to which, the term dates had changed meaning that the baby was due a week before term recommenced, the creche won’t take children under 5 months and the lecturers and faculty staff were unprepared to let me attend with a feeding baby in tow. All of which doesn’t add up to a very pro-life environment for students with unplanned pregnancies – but there’s a rant for another time.

So anyway, with waves of nausea, shaking clammy hands and tears of despair, I did the test and the two faint lines appeared. Robin, who had been in a state of total denial, followed by incomprehension, took the toddler off to Adoration and Mass, looking rather pale. I’ll never forget the look on his face upon his return, which can only be described as serene and glowing. He had an air of acceptance and even excitement, whilst I broke down in tears. “It’s going to be okay” he said, “I sat there with the Lord, I looked at Imogen, I saw how beautiful she is, I thought of our other two children and realised that this is just a gift. I know it wasn’t what we expected, I know it’s the last thing we wanted right now, I know it’s going to be tough as hell for you, I know you suffer, but I can’t help but think this is what God wanted for us”. He was terrified, knew full well how difficult the prospect of yet another pregnancy and birth so close to the other two would prove, both physically and mentally for me, and the knock on effects of that to us and our family, and yet he was overwhelmed with a sense that it was just meant to be. We had in good conscience attempted to avoid pregnancy, we had been extremely scrupulous and yet despite our best efforts, here we were about to have another child. It really did feel like God’s will and if it hadn’t been for the support of my husband, I don’t think that I would have made it intact over the past few months.

Make no mistake, this pregnancy has come at enormous cost, physically, emotionally and financially. It has taken every ounce of strength that I have had. There have been times when I didn’t actually think I could continue any longer, but with the help of my husband and the grace of God and much prayer, I have somehow found the strength to get through not only the physically debilitating effects of pregnancy, but also to pull back from the depths of despair. Though I couldn’t see it at the time, the ordeal of the past 9 months actually did more than any other traumatic events in my life to draw me closer to God; I really did experience my own personal Calvary.

So nothing could be more apt than Theodora – God’s gift, given out of love and totally perfect in every way.