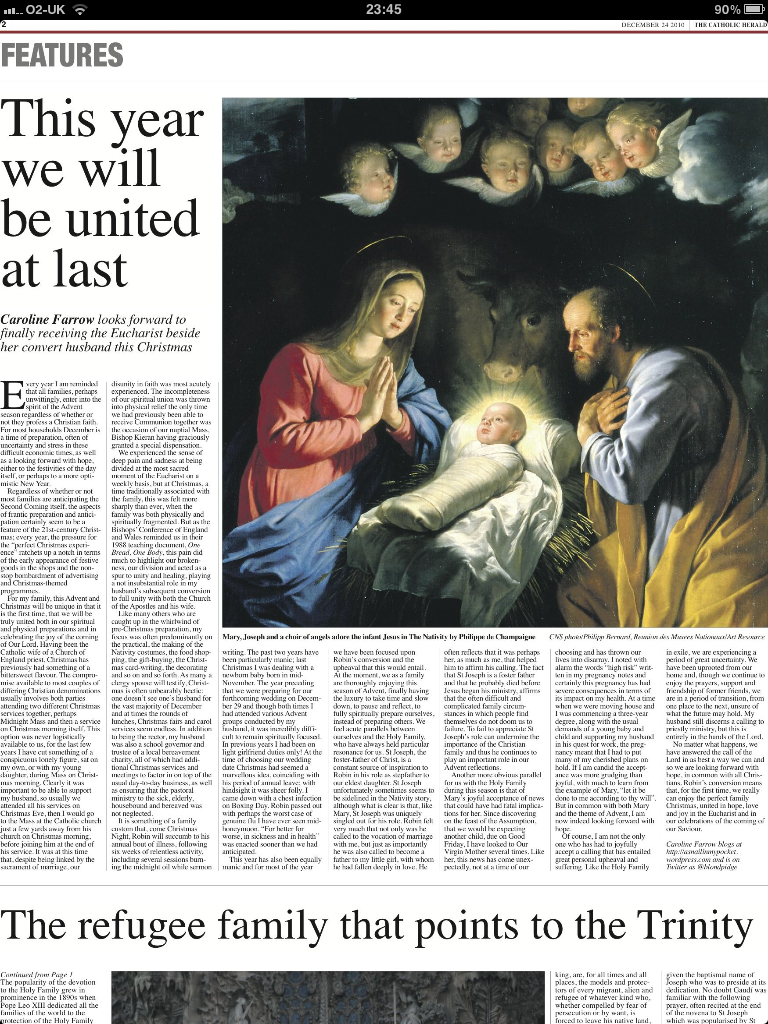 I was re-reading the piece I wrote for the Catholic Herald last Christmas and reflecting that it seems as relevant now as it did then!

For those who didn’t see it – here’s the subbed text. We did have a memorable and special Christmas, watching this year’s Rev Christmas special was a timely reminder that this short break from ministry has its advantages!

A peaceful & blessed Christmas to all – clergy families in particular. Only a few more days til it’s all over!

Every year I am reminded that all families, perhaps unwittingly, enter into the spirit of the Advent Season, regardless of whether or not they profess a Christian faith. For most households December is a time of preparation, often of uncertainty and stress in these difficult economic times, as well as a looking forward with hope, either to the festivities of the day itself, or perhaps to a more optimistic New Year.  Regardless of whether or not most families are anticipating the Second Coming itself, the aspects of frantic preparation and anticipation certainly seem to be a feature of the twenty-first century Christmas; every year, the pressure for the ‘perfect Christmas experience’ ratchets up a notch in terms of the early appearance of festive goods in the shops and the non-stop bombardment of advertising and Christmas-themed programmes.

For my family, this Advent and Christmas will be unique in that it is the first time, that we will be truly united both in our spiritual and physical preparations and in celebrating the joy of the coming of Our Lord. Having been the Catholic wife of a Church of England priest, Christmas has previously had something of a bittersweet flavour. The compromise available to most couples of differing Christian denominations usually involves both parties attending two different Christmas services together, perhaps midnight Mass and then a service on Christmas morning itself. This option was never logistically available to us, for the last few years I have cut something of a conspicuous lonely figure, sat on my own, or with my young daughter during Mass on Christmas Morning. Clearly it was important to be able to support my husband, so usually we attended all his services on Christmas Eve, then I would go to the Mass at the Catholic Church just a few yards away from his church on Christmas morning, before joining him at the end of his service.  It was at this time, that despite being linked by the sacrament of marriage, our disunity in faith was most acutely experienced. The incompleteness of our spiritual union was thrown into physical relief, the only time we had previously been able to receive communion together, was the occasion of our nuptial Mass, Bishop Kieran having graciously granted a special dispensation. We experienced the sense of deep pain and sadness at being divided at the most sacred moment of the Eucharist on a weekly basis, but at Christmas, a time traditionally associated with the family, this was felt more sharply than ever, when the family was both physically and spiritually fragmented. However, as the Bishops’ Conference of England and Wales reminded us in their 1988 teaching document, One Bread, One Body, this pain did much to highlight our brokenness, our division and acted as a spur to unity and healing, playing a not insubstantial role in my husband’s subsequent conversion to full unity with both the Church of the Apostles and his wife.

Like many others who are caught up in the whirlwind of pre-Christmas preparation, my focus was often predominantly on the practical, the making of the nativity costumes, the food shopping, the gift-buying, the Christmas card-writing, the decorating and so on and so forth. As many a clergy spouse will testify, Christmas is often unbearably hectic, one doesn’t see one’s husband for the vast majority of December and at times the rounds of lunches, Christmas fairs and carol services seem endless. In addition to being the Rector, my husband was also a School Governor and trustee of a local bereavement charity, all of which had additional Christmas services and meetings to factor in on top of the usual day-to-day business, as well as ensuring that the pastoral ministry to the sick, elderly, housebound and bereaved was not neglected. It is something of a family custom, that come Christmas Night, Robin will succumb to his annual bout of illness, following six weeks of relentless activity, including several sessions burning the midnight oil whilst sermon writing. The past two years have been particularly manic; last Christmas I was dealing with a newborn baby born in mid-November, the year preceding that, we were preparing for our forthcoming wedding on the 29th December and though both times I had attended various Advent groups conducted by my husband, it was incredibly difficult to remain spiritually focused. In previous years I had been on light girlfriend duties only! At the time of choosing our wedding date, Christmas had seemed a marvellous idea coinciding with his period of annual leave, with hindsight it was sheer folly.  I came down with a chest infection on Boxing Day, Robin passed out with perhaps the worst case of genuine flu I have ever seen mid-honeymoon. “For better for worse, in sickness and in health” was enacted sooner than we had anticipated!

This year has also been equally manic and for most of the year we have been focussed upon Robin’s conversion and the upheaval that this would entail. At the moment, we as a family are thoroughly enjoying this season of Advent, finally having the luxury to take time and slow down, to pause and reflect, to fully spiritually prepare ourselves, instead of preparing others. We feel acute parallels between ourselves and the Holy Family who have always held particular resonance for us. St Joseph the foster-father of Christ is a constant source of inspiration to Robin in his role as step-father to our eldest daughter. St Joseph unfortunately sometimes seems to be sidelined in the Nativity story, although what is clear is that like Mary, St Joseph was uniquely singled out for his role. Robin felt very much that not only was he called to the vocation of marriage with me, but just as importantly he was also called to become a father to my little girl, with whom he had fallen deeply in love. He often reflects that it was perhaps her, as much as me, that helped him to affirm his calling. The fact that St Joseph is a foster father and that he probably died before Jesus began his ministry, affirms that the often difficult and complicated family circumstances in which people find themselves, do not doom us to failure. To fail to appreciate St Joseph’s role can undermine the importance of the Christian family and thus he continues to play an important role in our Advent reflections.

Another more obvious parallel for us with the Holy Family during this season, is that of Mary’s joyful acceptance of news that could have had fatal implications for her. Since discovering on the Feast of the Assumption, that we would be expecting another child, due on Good Friday, I have looked to Our Virgin Mother several times. Like her, this news has come unexpectedly, not at a time of our choosing and has thrown our lives into disarray. I noted with alarm the words “high risk” written in my pregnancy notes and certainly this pregnancy has had severe consequences in terms of its impact on my health. At a time when we were moving house and I was commencing a three year degree, along with the usual demands of a young baby and child and supporting my husband in his quest for work, the pregnancy meant that I had to put many of my cherished plans on hold. If I am candid the acceptance was more grudging than joyful, with much to learn from the example of Mary, ‘let it be done to me according to thy will’. However, in common with both Mary and the theme of Advent, I am now indeed looking forward with hope.

Of course, I am not the only one who has had to joyfully accept a calling that has entailed great personal upheaval and suffering. Like the Holy Family in exile, we are experiencing a period of great uncertainty. We have been uprooted from our home and though we continue to enjoy the prayers, support and friendship of former parishioners, we are in a period of transition, from one place to the next, unsure of what the future may hold. My husband still discerns a calling to priestly ministry, but this is entirely in the hands of the Lord.

No matter what happens we have answered the call of the Lord in as best a way we can and so we are looking forward with hope, in common with all Christians. Robin’s conversion means, that for the first time, we really can enjoy the perfect family Christmas, united in hope, love and joy in the Eucharist and in our celebrations of the coming of our Saviour.