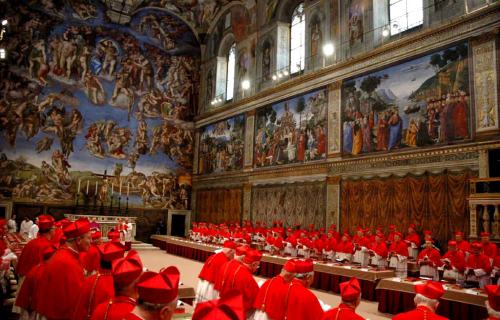 The words of the Secretariat of State seem particularly prescient in the light of the damaging allegations that have surfaced regarding Cardinal Keith O’Brien in this morning’s Guardian.

Once again the media seem to be disregarding the rules surrounding natural justice and due process that would be followed in any criminal court, namely a presumption of innocence until proof to the contrary, and are commenting upon these allegations as those they were established fact, with the usual suspects rubbing their hands in glee, not least those who thought Cardinal O’Brien’s Bigot of the Year award, fitting.

With regards to the allegations, the following questions present themselves:

All of which brings me neatly onto Cardinal Mahony, who due to his mishandling of priests guilty of sexual abuse in his diocese, is also subject to similar calls to stay away from the conclave. Let’s be clear. Cardinal Mahony, though guilty of severe negligence is not a pedophile or abuser himself. It’s hard to get one’s head around why he didn’t report these abhorrent crimes to the police, or at the very least lock the perpetrators up in a remote monastery somewhere, but as has been documented, times were different then. The psychology of abusers was not understood in the same way, it was genuinely believed that therapy could cure a disordered sexuality, and the abusers’ professions of repentance were taken at face value.

There’s a whole essay into the factors contributing to the abuse that took place and its subsequent cover-up by local diocesan bishops and parallels to be drawn with what happened in other non-Church institutions such as for example the BBC, but it isn’t fair to imply, nor is there evidence to suggest, that those who did cover-up the scandal, did so because they didn’t care about the victims or because they thought that abusers were likely to re-offend and simply didn’t care, what enquiry after enquiry has demonstrated is that they were misdirected out of love for the church and actually ignored the regulations that were already in place which directed bishops to report these crimes to the police. There is no basis for the claim that various bishops simply didn’t care – the credible answer is, that as prelates such as Mahoney have testified, they simply didn’t get it.

Does that mean he should be disbarred from voting in the conclave to satisfy the demands of a baying press? I would posit that a Cardinal who has personally faced the scandal of clerical sex abuse and who has faced widespread criticism and rebuke not only from the outside world, but also from his peers, would be ideally placed to prayerfully reflect upon who should succeed Pope Benedict and which candidate may possess the necessary qualities. Cardinal Mahony indisputably knows the enormity of the scandal and the huge repercussions for those who may get it wrong. There can be no doubt that he does now understand the seriousness of it all. Perhaps a good comparison would be that of the airline industry? Whenever a pilot has been implicated as being at fault in a serious incident, such as the Kegworth disaster in 1989, British Airways always rush to offer that pilot a job, the First Officer in that tragic crash is now a serving Captain with them – the rationale being that they will never make that mistake again.

Cardinal Mahony may well have made a grievous mistake, one for which he has been disciplined by his successor, but that is no reason to doubt his judgement or ability to vote in the conclave. He may well be better placed than many of the others and have a valuable insight into the motivations and catastrophic failures.

Ultimately whether either of the cardinals attend is a matter for them, their consciences and their fellow peers. It is not for the media or general public to judge and were the Vatican to announce that they were succumbing to public pressure and the cardinals disbarred from voting, this would set a very dangerous precedent, besides which no-one has the authority to prevent their attendance. Only they can recuse themselves. No-one can make judgements about others’ hearts. O’Brien may well be innocent, only time will tell.

In the meantime, anyone wishing the cardinals not to exercise their rights, ought to learn the basics of reverse psychology. The louder the calls for non-participation, the greater the guarantee and likelihood that both Cardinal O’Brien and Cardinal Mahony, will attend, and no-one could blame them for doing so.

10 thoughts on “The Cardinals and reverse psychology”