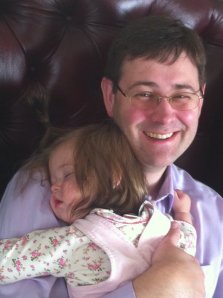 Warning – not for those with weak constitutions, the following post will be laced with huge amounts of saccharin.

There have been moments in my marriage where I have wanted to set about my husband’s head with a frying pan. The most recent being “book-gate”, namely the saga of what to do with his vast theological library acquired over the past 20 years. Never mind the rest of our meagre worldly possessions, we would have to ensure that whatever else happened,the books were lovingly stored, categorised and sub categorised, even if this meant that we had to substitute luxury items of bedroom furniture, such as wardrobes, for bookcases. At present we are sat here surrounded by unpacked boxes, because apparently I need to decide which are my allocated shelves. Only once I’ve done that,is the great unpacking able to commence – books can be alphabetized and cosmic order will be restored. But until the books are unpacked safe and sound, then no other boxes, like the ones containing kitchen implements for example may be opened…

Given this is meant to be a post of praise, I’ll stop there, although it does need to be noted that Robin is the human equivalent of a womble. He exhibits worrying hoarding behaviour, which when moving to a house substantially smaller than the Rectory does need curtailing. It’s allegedly the fault of his parents’ war-time generation mentality,  “oooh the lid of this broken kettle might come in handy for something, you never know, best not throw it away”. “I can’t throw those postcards away, I had them on my wall at university”. *whispers: evangelical poverty darling* Camels, eyes of needles, barns, you know what I’m talking about…

Anyway, part of our journey means that Robin has to get a normal layperson’s job. On yer bike and all that. Sounds easier than it is in this current climate. Plus its additionally difficult when excepting a year out as a pastoral assistant, your entire career history consists of 14 years of ministry. On the face of it, a Rector should have tons of transferable skills right? Pastoral skills, team-building skills, budgeting skills, crisis-management, conflict resolution, administration (ahem), marketing and so on and so forth. The reality is, that most employers see ex-vicar on the CV, have visions of beards, goats cheese, corduroy jackets with leather arm-patches, open-toed sandals, worry about their workforce being evangelised and run a country mile. The most obvious openings seem to be school or prison chaplaincy jobs, which at the moment are very few and far between. One interview was attended a good 50 miles away, only to be told “frankly, we think you’re a bit too intelligent and cerebral in terms of what we’re looking for, think you’d be wasted”, which illustrates the other problem. With 3 theology degrees, including 2 MAS, poor Robin finds himself somewhat over-qualified for most positions.

Providentially however, he spied an advert for a funeral director recently. Hoorah we shouted, absolutely perfect. Stacks of experience, knows the industry well, enjoyed the pastoral aspects of the job, no squeamishness about dead bodies or funerals as a whole and felt that perhaps in some way he could continue a ministry of healing and helping the bereaved, as well as ensuring that the dead were accorded the appropriate dignity and respect. So off the application went, detailing the 14 years of funeral experience, including taking funerals, visiting the dying and bereaved, arranging the services, acute attention to detail, liaising with funeral directors, digging graves for ashes, updating burial registers and so on. Letter comes back: sorry other candidates have more experience. Nevermind I said, it’s the automated online system, jobs come up all the time at this nationwide company, next time, add a covering letter with your CV, put some bullet points (bullet points are always good in these situations) and make your skills absolutely explicit. I used to hire people, I know these things. Yet again – computer says no.

So on-spec letters go off to all the funeral directors in the locality. Turns out one, knows Robin and arranges informal chat, which then leads to interview. The upshot is that they realise that probably he’s way too over-qualified to be a funeral services operative (the person that picks up the bodies, washes the hearse etc) and they can see potential for greater things. However, given the current climate (groan, I really need to use a different phrase) there aren’t that many opportunities, but there is a potential business manager position which they would like him to apply for. In order to be in a position to apply for it, he is therefore going to have to start with them on a casual basis, picking up the bodies, hearse driving for £6/hour for the next 4-6 weeks, at which point he can apply for this position which he may or may not get. If he doesn’t however, then it is likely that he will be able to apply for a funeral director’s position, and at least if that doesn’t materialise, he’ll still have the £6/hour job which will give him the correct experience, if a position comes up with another firm. Got that?

So, why am I proud? Because I realise that this is not the most pleasant of jobs and not what my husband feels that he is ultimately called to do. However, the brave decision, which I fully support to leave ministry and become a member of the Catholic Church, has entailed the double-whammy of loss of house and income. Even if we did qualify for Housing Benefit and JSA and whatever else, which we don’t as Robin is deemed to have voluntarily made himself homeless and jobless,  then part of me would feel guilty, because although the state does have an obligation to look after vulnerable people, actually tax-payers shouldn’t have to fork out for decisions of conscience. Besides, this was not a decision based on any events going on in the Church of England, this was simply him following a calling. He had no other choice than to lay down his ministry, to continue to have served, when his heart was elsewhere would have been a lie. Regardless, this was a personal choice and neither of us expect the tax-payer to foot the bill. His income will invariably mean that we will be entitled to benefits in the form of income support, however, he will be working and paying tax on a wage.

The St Barnabas Society have been incredibly generous in terms of their support – without them we would be literally homeless, thanks to their generosity we have a roof over our heads and I am immeasurably grateful, both to them and to anyone who has ever donated to them. Not only have they provided practical and financial help in terms of finding us a house, but they have been a source of great moral support and guidance. No doubt they would have ensured that we had food on the table as well, but though one needs to accept help graciously, we will be able to support ourselves by living frugally.

That’s why I am so very proud of my husband, because instead of relying on anyone else to help him, instead of expecting anyone else to foot the bill, he is not sitting around despairing or bemoaning the lack of suitable employment but instead being proactive and accepting not the most pleasant of jobs in order to ensure that his family don’t have to suffer. I’m not always very effusive in person, but I know that from time to time he dips into my blog to see what the missus is ranting about now, so when you do see this darling, thank you. I am more proud of you than you could ever know.

See, told you it was saccharin, even I am having a blub as I type. As a family we have always prayed to St Joseph, protector of the Holy Family, who has a particular and special resonance for us. Never has this seemed more apt.

6 thoughts on “My St Joseph”